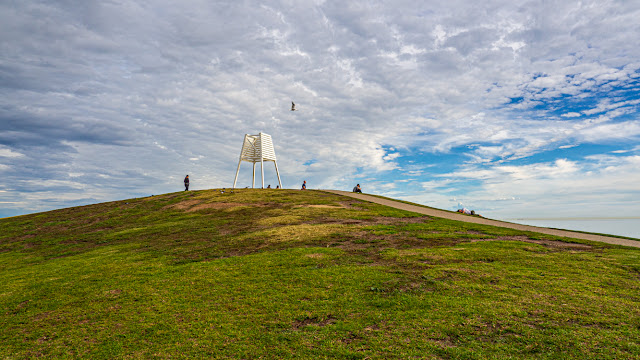 Point Ormond, Elwood.
It's hard to imagine but this picturesque spot was the site of Victoria's first quarantine station! Right-back in April 1840 a ship called the Glen Huntly, bringing immigrants from Scotland, arrived in Port Phillip Bay with the dreaded yellow quarantine flag flying. Of 157 passengers, 10 had succumbed to Typhoid Fever while at sea and some 50 other passengers were infected. To prevent the disease from running rampant in the then small town of Melbourne, Lieutenant Governor Charles La Trobe ordered the ship moor in the swamp area just off Point Ormond.  The passengers were brought ashore and the infected detained in a hastily constructed rough canvas camp guarded at land and sea until they were cleared of the disease.  Three died on Point Ormond and were buried here. A wooden fence enclosed their graves marking St Kilda's first cemetery. The fence fell into disrepair and, over the ensuing decades, erosion compromised the graves. The remains of John Craig, George Armstrong, and James Mathers were exhumed and the early pioneers who risked all were commemorated in a reburial at the new St Kilda Cemetery in 1898.
Photo By Joe