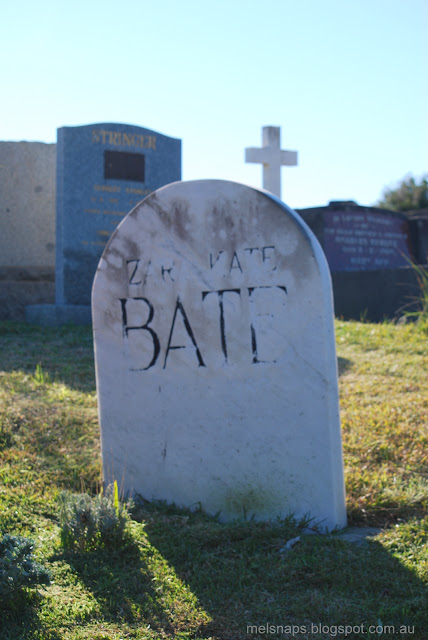 This marble head stone with its almost faded epitaph is the memorial to Dame Zara Bate, the wife of Harold Holt, Australia's 17th Prime Minister.  While the engraving in the marble is still legible the black, contrasting paintwork is all but gone. Sadly even her name is hardly legible.  We first discovered this headstone many years ago and revisited the cemetery intentionally to rediscover it.  We walked passed it three times before we recognised it.  The casual visitor would probably never stop.

P.A. Pemberton In the Australian Dictionary of Biography ( http://adb.anu.edu.au/biography/holt-dame-zara-kate-12652 ) reports Dame Zara Kate Holt (nee Dickins) was a fashion designer and business woman. She met Harold Holt when she was 16. In the 1930’s depression she borrowed 150 pounds from her father and established a dress shop in Little Collins Street, Melbourne.  She sold the business two years later. Pemberton writes that Harold would not marry Zara before he had sufficient funds so she set off on an around the world cruise to England.  On the return journey she met James Fell, a British Army Officer.  She married Fell in May 1935. They set up house in Meerut in India.  Zara returned to Melbourne periodically including for the birth of her three boys.  The last two, born in 1939, were twins.

Wikipedia suggests Zara and James marriage broke down soon after the birth of the twins. Zara divorced James in 1946 and married Holt the same year.  By now Holt was a solicitor and a member of parliament. He adopted the three children.

Pemberton writes that with her husband often in Canberra, Zara opened a boutique called Magg in Toorak Village.  Magg later expanded to Double Bay in Sydney and Myer.  Zara became popular as a speaker on the fashion circuit.  By 1956 she divided her time between their home in Toorak, their house in Portsea and ‘the shack” at Bingil Bay, North Queensland.

In January 1966 her husband, Harold Holt, became Australia’s Prime Minister.  Less than two years later on 17 December 1967 she was at the Lodge in Canberra while Harold was in Melbourne to witness a yachtsman, aboard a yacht called the "Lively" on his solo circumnavigation of the globe, sail through the heads of Port Philip Bay.  After the event he, several of his friends and two body guards drove to one of Holt’s favourite swimming and snorkeling spot; Cheviot Beach on Point Nepean near the ocean side of Portsea.   Holt decided to go swimming despite warnings from his friends.  The surf was large and the beach well known for its rips.  He soon disappeared in the swell.

Televisions and radios around the world crackled into life with the news that the Australian Prime Minister was missing. Dame Zara flew to Melbourne and was driven to Portsea where she was besieged by reporters. Hope gradually diminished and Zara faced the grim reality of her husbands death.  An extensive search by police, navy divers, air force helicopters and local volunteers failed to find his body.

Harold Holt was a strong swimmer and skin diver and there has been much speculation surrounding his disappearance much of which survives today.  Stories range from cramp or heart attack whilst in the water, suicide, faking his own death and conspiracy theories ranging from espionage, being picked up by a Chinese submarine or even a UFO!  The Coroner’s Report records the cause of death as drowning in accidental circumstances.  One of the most famous memorials to Holt is the Harold Holt Swim Centre in Glen Iris Melbourne. Ironic.

On 19 February 1969 Zara married Henry Jefferson Percival Bate.  She retired in Surfers Paradise Queensland and died on 14 June 1989.  She was buried in Sorrento Cemetery, Victoria a long way from Queensland but a ten minute drive to Cheviot Beach where Holt disappeared.  Pemberton reports that her estate was sworn for probate at AUD$5,173,165.

Her all but illegible epitaph reads 1909 – 1989 Dame Commander of the British  Empire. A Proud  Australian. RIP. Shared with Taphophile Tragics.