YOU KNOW YOU’RE ON HOLIDAYS WHEN 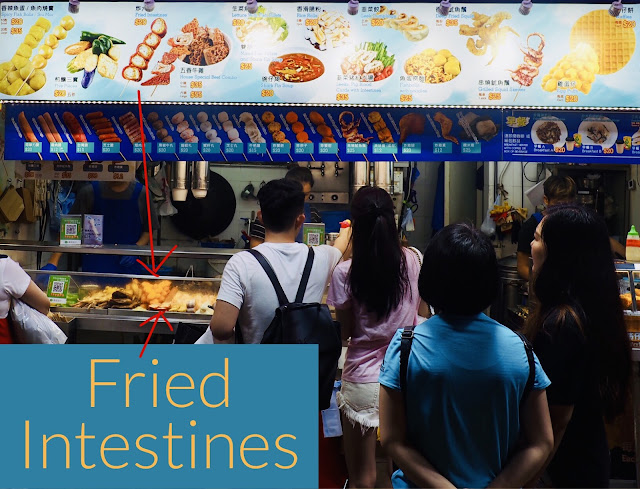 You know you are on holidays when ...

You reserve a compact hire-car and the only car left is a huge one, a challenge to navigate through the narrow country lanes in England.
You order a red sangria and a white sangria in Seville, Spain and you’re given two red sangrias and a glass of white wine.
The plane aborts the first two landings in Catania, Sicily and thankfully touches down on the third.
You set the password for the room safe in Catania and then can’t open it to retrieve your passports.
You take photographs at an event inside a cathedral in Catania, Sicily and suddenly realise it’s a funeral.
You discover your accommodation in Catania is next door a cannabis retailer.
A proud manager gives you a free private tour of the Opera House in Catania during performance preparations.
You have to yell “HELP” for someone to rescue you in Milazzo, Sicily because the toilet door won’t open.  Don’t want to miss that hydrofoil.
You arrive in Rome at midnight take a wrong turn walking to the airport hotel and add a kilometer to the journey.
You’re addressed as “Bella Bronzati!” and asked “Are you from Africa?” by an African street trader in Rome.
You leave the washing machine on in your apartment in Rome and when you return you find the vibration from the spin cycle has made it creep to the other side of the bathroom.
You are woken at dawn in Rome each morning by the rooster kept on the rooftop of the apartment opposite.
You’re thankful that the worst protests in the country since the 1960’s are on the other side of the harbour in Hong Kong.
You see “Fried Intestines!” on the menu in Kowloon.
You ask for a serviette in a back street dumpling house in Kowloon and the owner unwinds paper from a toilet roll.
The main ingredient in your dinner in Kowloon is Fish Balls.
You see the first rays of the sun appear on a farm in Corsham England, feel the beat of life in Seville Spain, witness the wild flowers high up on Vulcano Italy, watch the moon reflect in the Tyrrhenian Sea and share smiles in the eyes of the people that gave us joy. 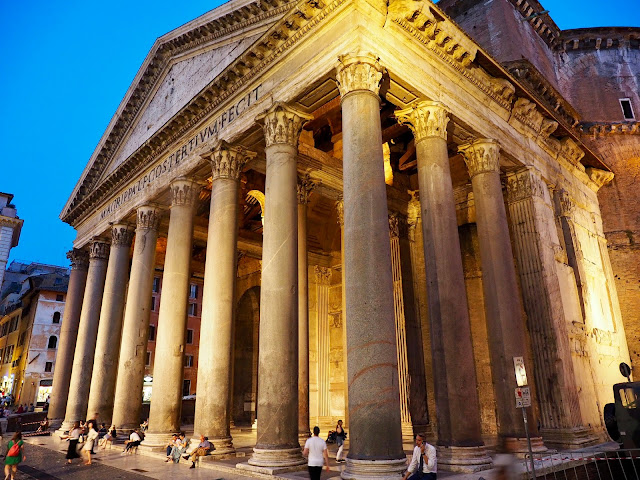 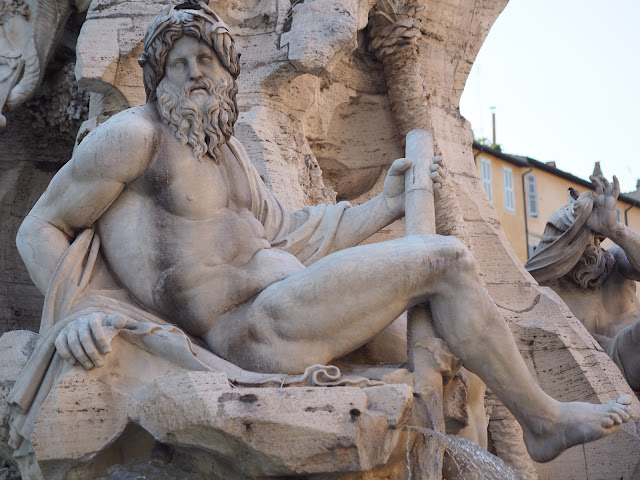 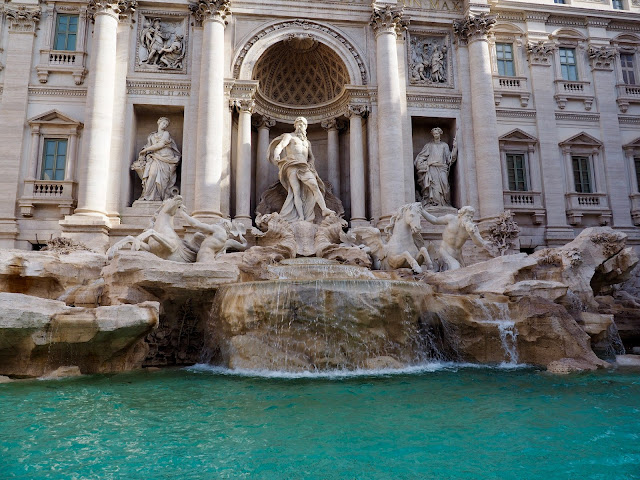 The curtains were up, the stage in full view and Rome was on show from the instant we stepped foot outside.   The well worn cobblestone streets led the way from Piazza Navona to St Peter’s Basilica, from the Pantheon to the Trevi Fountain and from Piazza del Popolo to the Colosseum.   The performance that is “Rome” is revealed around every corner turned. It is impossible to capture. It’s best seen in person with front row seats.  I’ve chosen three scenes.

The first is Hadrian’s Pantheon, ancient, strong and imposing.  Thousands of years old (126AD) and still standing. Those Romans sure could build.

The second is one of Bernini’s statues (The River God - 1651) Piazza Navona.  Sculpture at its very best.

The third is Salvi/Pannini’s Trevi Fountain, perhaps one of the most famous fountains in the world.

I wonder what Hadrian, Bernini or Salvi/Pannini would say if we could bring them back today and stand them in front of their masterpieces?  What would they think of the thousands of tourists photographing themselves with a look to the right, a look to the left, a pout here, a pose there? Would they be delighted, pleased, proud that everyone wants to look their best in the presence of their great work or would they just be bemused? 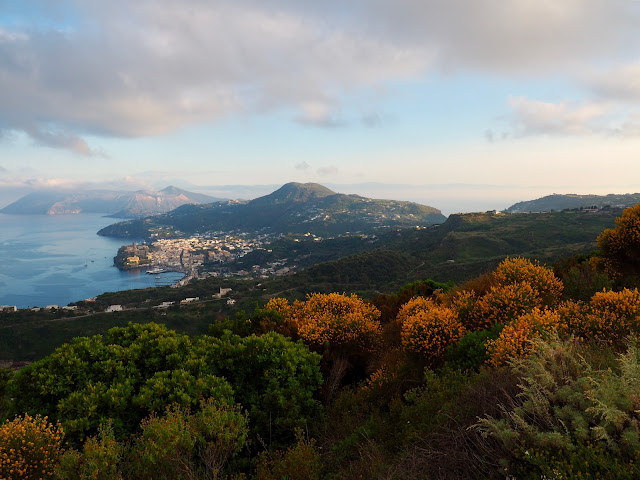 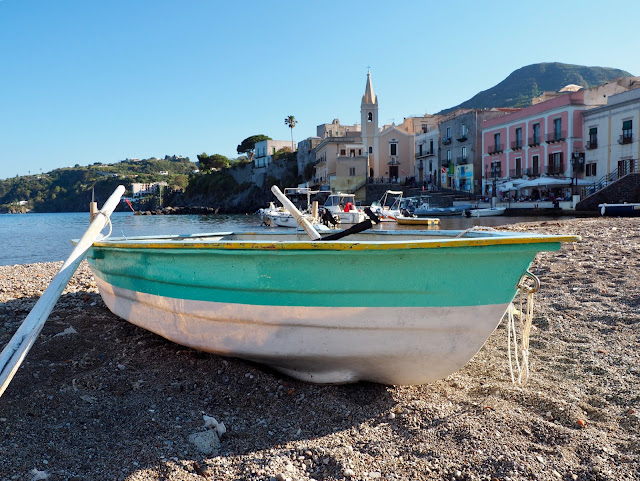 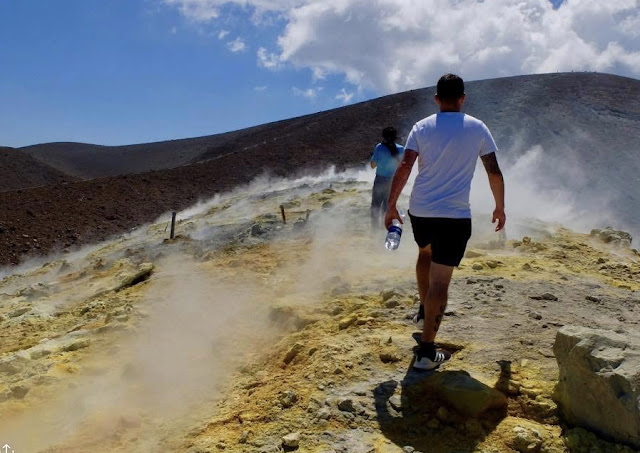 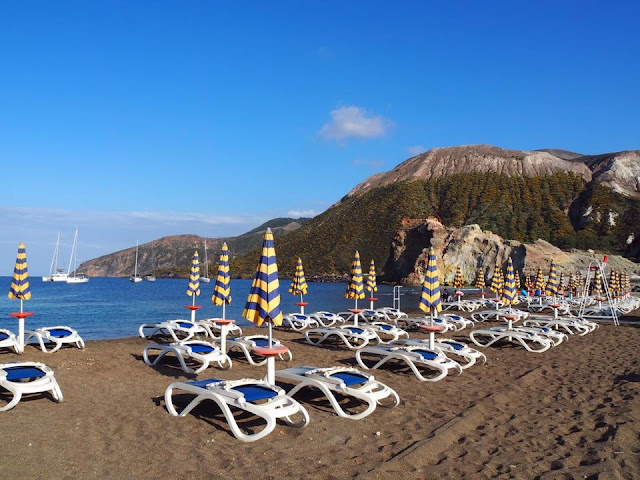 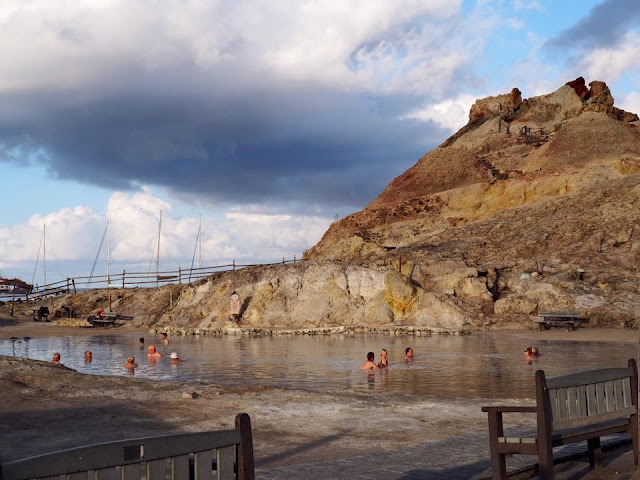 VULCANO, the god of Fire, lives in the Tyrrhenian Sea.
Photo By Joe 3 comments: 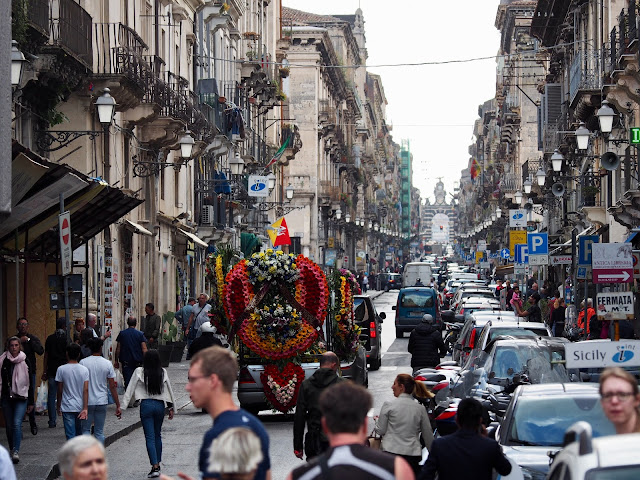 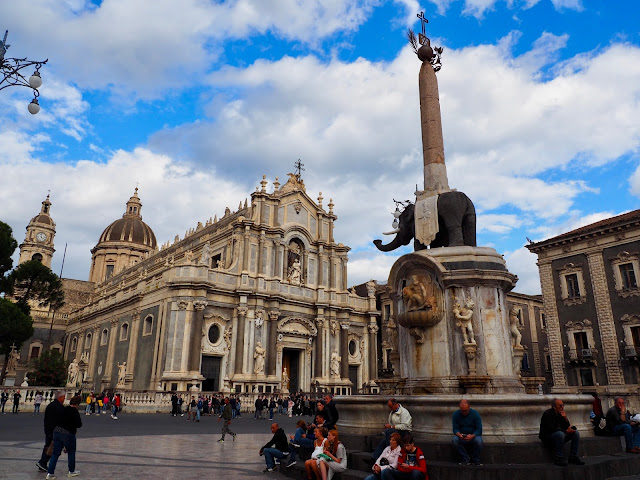 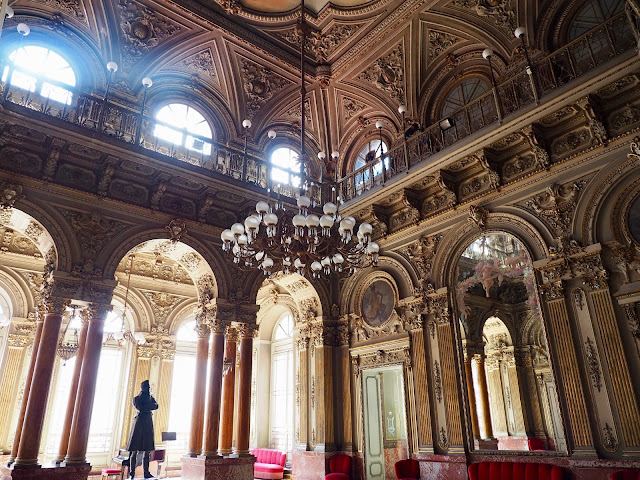 On our first approach to Catania airport (yes ... first approach) the plane almost touched down, leaned a little unsettlingly to the left before the pilot aborted the landing. Engines in full throttle we were skyward again circling back out to sea.  The mood was jovial with only a few white knuckles gripping the backs of the seats on our second approach.  We could see the tarmac, we were almost there; “Not again” exclaimed some passengers as the pilot decided it was still too windy and up we went again.  Another 20 minutes later and the runway was in sight. “Third time lucky” I said. A bit rocky but there were cheers, applause and sighs of relief when the wheels thumped to Catanese ground.

We have chosen three photos of our day in Catania. The first shows the main street, the main square and the third the interior of the opera house.

We found Catania, the second largest city in Sicily, to be a survivor.  It has a rough, sometimes abandoned exterior, a myriad of streets with all facets of life on show and the interior we saw hinted of a rich past and suggested hope of a better future. I’m still thinking of the stranger I shook hands with after our successful landing in Catania.
Photo By Joe 5 comments: 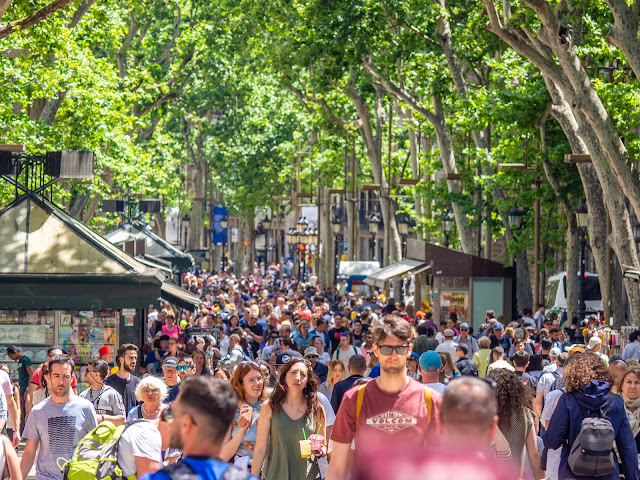 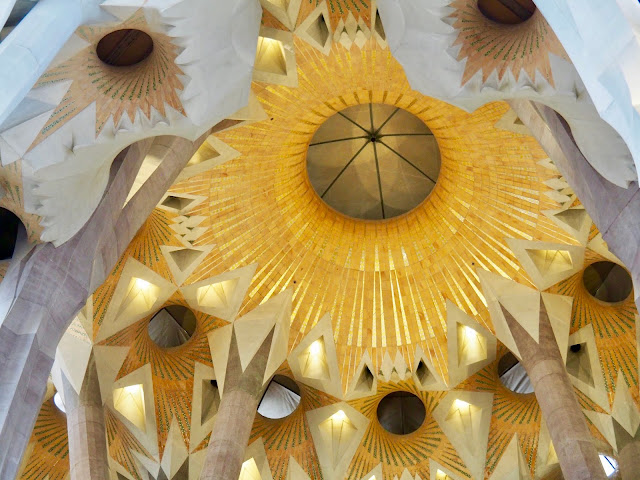 Part of the ceiling of Sagrada Familia.

“Frenetic” - fast and energetic in a rather wild and uncontrolled way. Definitely! That’s the Barcelona we saw.

It was evident in the blur of tourists walking beside, towards, across & through us on La Rambla, the main street lined with PVC covered stalls containing everything from a flamenco dancer frozen mid castanet on a fridge magnet to cafes serving all kinds of tapas and drinks in glasses the size of christening fonts.  So, so crazy.  So very busy.  The curvy, narrow, gothic laneways either side of La Rambla offered some relief but thank goodness for google maps.

With Barcelona comes everything Gaudí.  Frenetic still comes to mind. “Is he madman or genius? Only time will tell” said the narrator in a film showing at Palace Güell one of his earliest feats of architecture.  I have to give it to him, the Palace was genius. Then there’s Sagrada Familia, a Catholic Basilica under construction since 1882, that’s right, over 130 years so far and it’s still unfinished! To me the exterior is the work of a madman, a melee of religious scenes mixed with seemingly random placement of animals, turtles, snakes, lizards, dogs.  Ah, but it’s inside where the genius appears, a huge space vaulted to the heavens filled with dazzling light through the vibrantly coloured stained glass windows.  The confusing exterior gives no clue to the glory within.

Frenetic it definitely is.  Barcelona demanded our attention with all our senses. 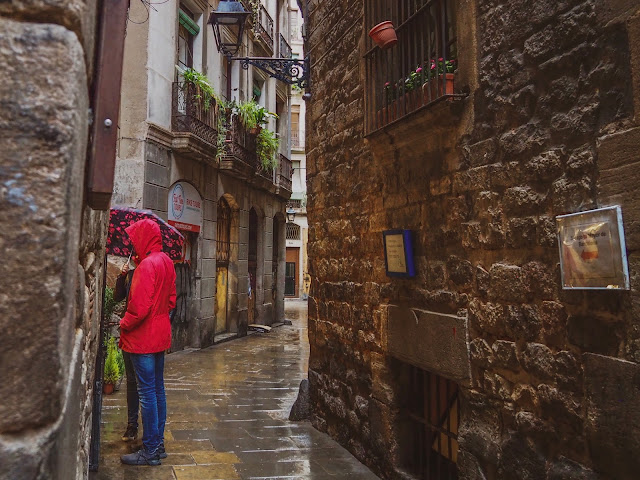 It’s wet.  Rain is falling in Barcelona, proper rain, the like of which we had not felt in Melbourne for many months.  Umbrellas are up, the bright ones reflecting their reds, blues and yellows in the glistening cobblestones. Ponchos on, the inclement weather doesn’t dampen our desire to explore the narrow mediaeval streets of the Gothic Quarter we have heard so much about. “Time to ditch the map” I said succumbing to the call of those ancient laneways. “Come this way.”,  “Have a look around this corner.”, “What’s down this way?” they whispered.  We were lost, happily, wonderfully lost.
Photo By Joe 3 comments: 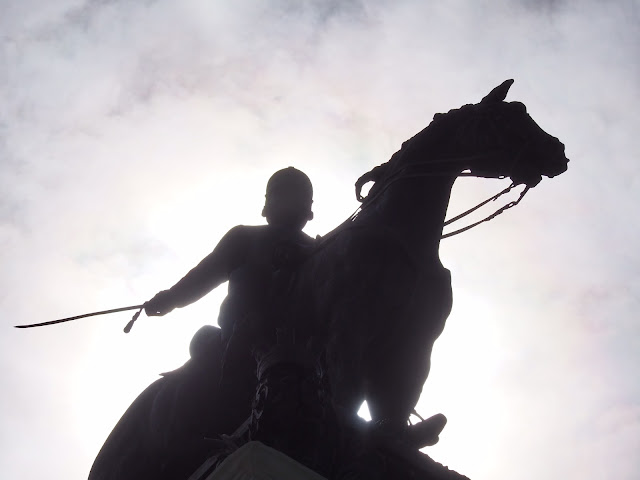 People, shops and shopping bags, more people, so many theatres, even more people, cafes & restaurants galore. This was the overwhelming scene that confronted us as we first stepped on to the Gran Via, Madrid’s main street. Wide-eyed and aware, Spanish, French, German words bounced off my ears. English uncommon.  “It must be coffee & churros time”, I suggested hoping to find a spot to watch, see order in the crowd, some sense to the traffic, meaning to the signs. The Churros was too deliciously distracting to see beyond the chaos so off we went again.  Gran Via here we come.

We were now part of the crowd. The majesty of the buildings many topped with sculptures, angels, eagles, warriors and chariots some bronze others most likely marble drew our gaze upwards capturing our attention eight maybe ten stories high. Adorned with decorative window surrounds, timber shutters and wrought iron balconies.  “There’s no grime!” The usual dust, dirt suffocating the buildings in so many congested cities was absent.  Perhaps this is how the grandeur of the early 1900’s should look.  “Bravo Madrid!”

Not just the architecture impressed.  The “Ola” with a smile as we tried to make ourselves understood was a pleasure even though we were given two red sangrias and a white wine when we thought we had ordered one red and one white sangria.

Adeos Madrid.  Next stop Barcelona via a bullet train at 300 km p/h. Whoosh! 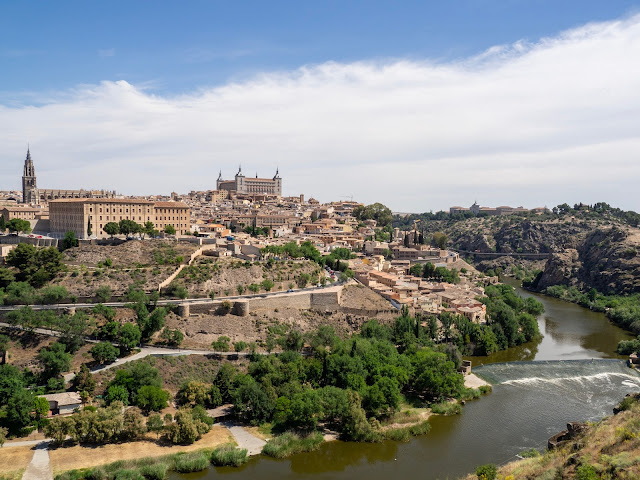 An ancient city set on a hill above the plains of Castilla-La Mancha in central Spain. 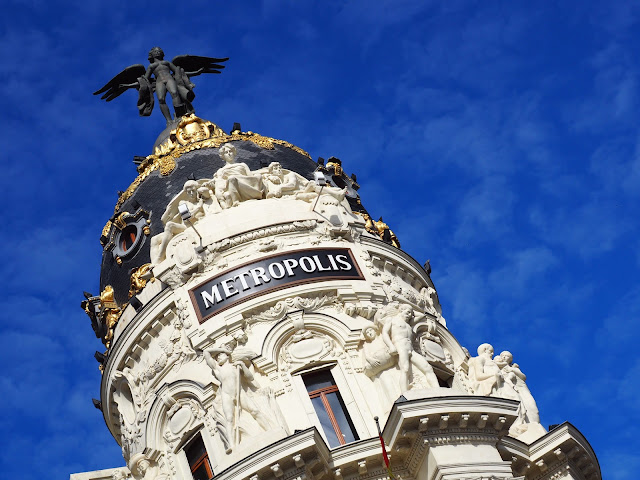 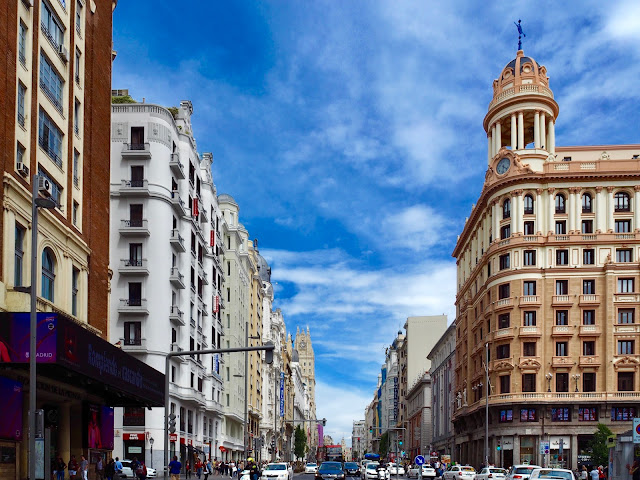 This is one busy city. 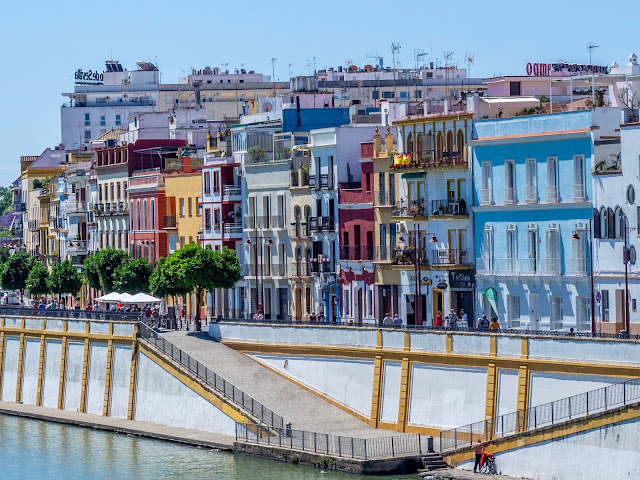 “Seville, you are a surprise.” 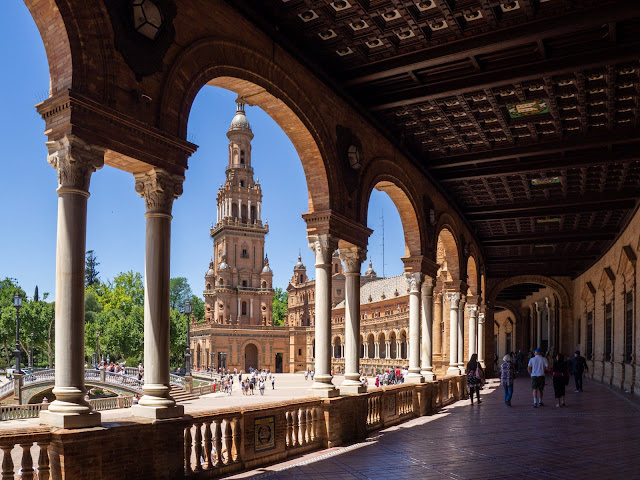 The Plaza De Espana in Seville is truly breathtaking.